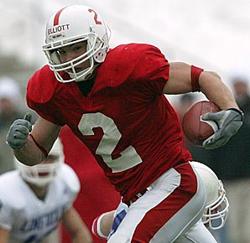 MAJOR AWARDS: 2003 Gagliardi Trophy recipient…2002 Gagliardi Trophy Finalist…NCAA All-Divisions record of 47 consecutive games with a reception (still holds)  ended his career 2nd in NCAA Division III in both receptions (327) and touchdown receptions (56), 4th in receiving yards (4,200) and 5th in all-purpose yards (7,605) [prior to the 2002 season, the NCAA did not recognize postseason statistics in season and career totals]…ended his career 2nd across NCAA All Divisions in receptions (327) and 3rd in touchdown receptions (56)…2003 Stagg Bowl (NCAA Division III Championship game) Most Valuable Player…holds the NCAA Playoff records for receptions in a tournament (41) and the longest punt return (89 yards on Nov. 24, 2001, which was the only touchdown scored in the 9-6 win over Wisconsin-Stevens Point)

POST-COLLEGIATE ATHLETIC CAREER:  Signed on as a free agent with the Minnesota Vikings in 2004-05.  Suffered a career ending injury during the 2004 training camp.

CIVIC SERVICE: Is the co-owner and Director of Operations of Everyday Living in Eagan, Minn...Everyday Living is a foster care sytem for adults with special needs...Elliott was inspired to co-create this company following he and his family's experience with his younger brother, who suffered a Traumatic Brain Injury as a result of a car accident prior to his senior football season at SJU in 2003...served four years years as President of the J-Club(SJU's athletic booster club) and still currently serves on the board...also served on SJU's Alumni Association Board...has extensive volunteer experience at Feed My Starving Children in Eagan, Minn. 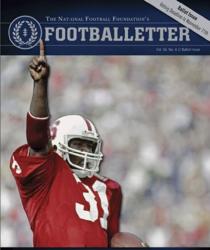 2. Within 48 hours you will be emailed an electronic ballot

3. On the ballot line that requests membership number, please list:

"New Member" or your membership # which will be emailed to you.